John was born in Coopers Mills, Maine, one of 5 children. Upon the death of his father, at age nine, John was sold into indentured servitude. John was bought by a blacksmith who trained him in blacksmithing and mechanics. At age 20, John was released from servitude to join the military and fight for the U.S. in the Spanish American War. He was awarded a Distinguished Service Cross in 1931 for heroism in the Philippines in 1900. He was one of 4 men who was pinned down by 84 enemy soldiers, engaging them long enough for reinforcements to arrive and win the battle.

Upon being discharged from the military John sold his ticket home and bought a stake in what was eventually to become the Boyington Bros. Logging Company in Truckee. They sold the business in 1920 and John became a farmer in the Loomis area where he built the family residence which exists today on King Road. At about this time John became the official trapper for Placer County. Later, in the mid 1930’s, he was elected to the Placer County Board of Supervisors to which he was re-elected several times throughout the 1930’s, 1940’s and 1950’s.

The above information was provided on November 11, 2001 by Ed Horton of Loomis, John Boyington’s grandson. 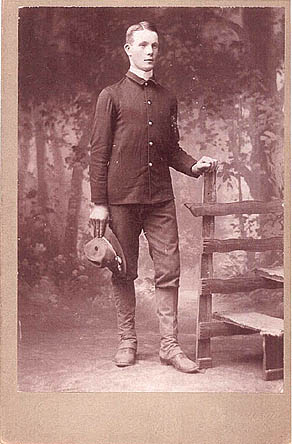